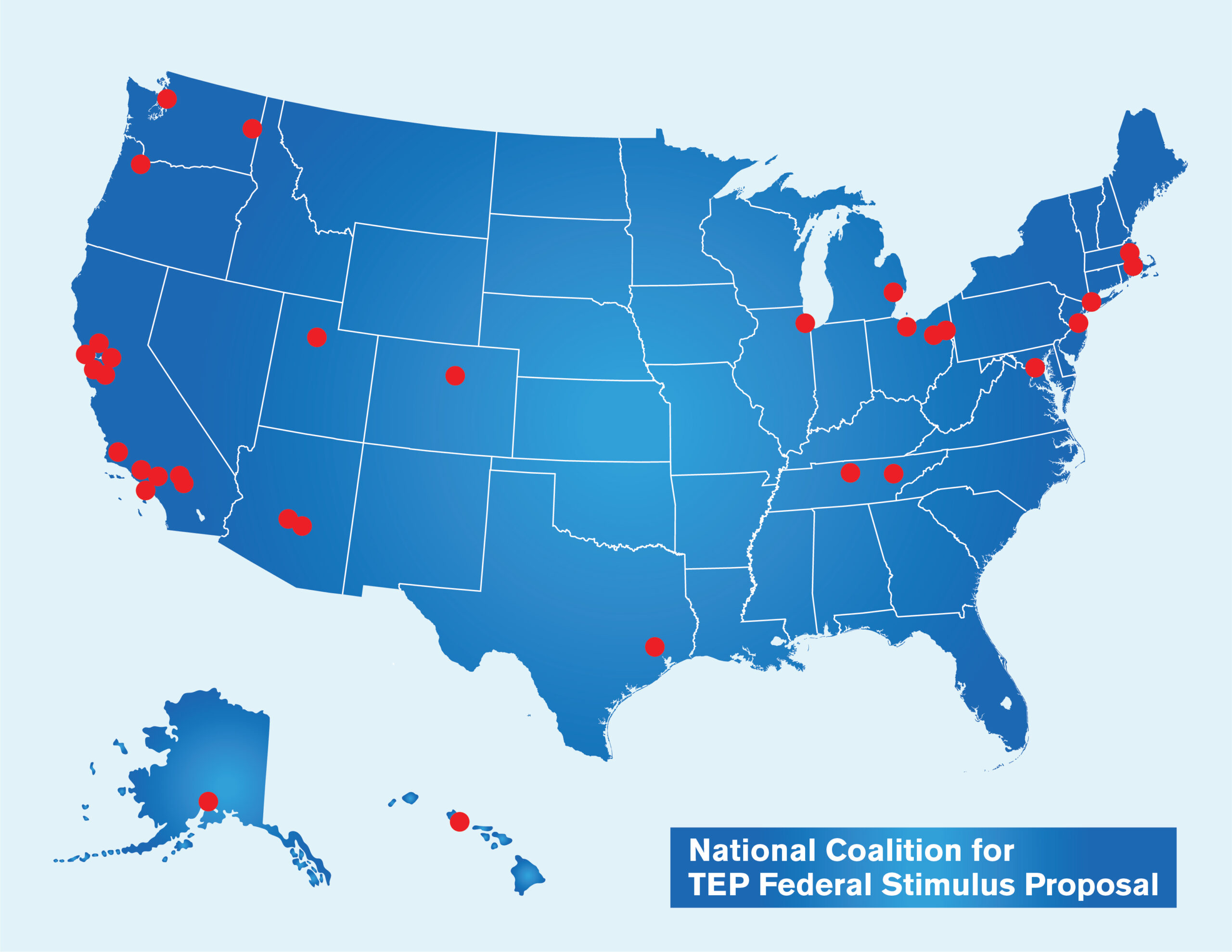 UPDATE (3/30/21): The national coalition supporting the TEP stimulus proposal has now grown to over 100 organizations representing 18 states. On March 30, 2021, the coalition sent a letter to the new Biden Administration updating the White House and relevant agencies on the proposals and voicing support for President Biden’s American Jobs Plan which is in line with the coalition’s priorities. Please read the updated letter here and the updated proposal here.

With the U.S. House of Representatives set to vote on stimulus measures this week, the national coalition sent a letter on Monday to promote new findings showing that TEP’s proposal could create up to 2.3 million jobs across the U.S.. The research from economic advisory firm HR&A estimates that the proposed $150 billion in stimulus investment would boost employment in all sectors, with 1.4 million jobs expected to build out our nation’s zero emissions transportation infrastructure alone.

“Distributed proportionally across the US in targeted communities, this type of investment is critical to providing immediate economic stimulus and job creation, as well as to creating a foundation for future economic development while creating more resilient communities,” the letter says.

“This growing national coalition understands that tackling the health and economic crisis requires bold action that reimagines our economy and restores the livelihoods of millions of Americans,” said Matt Petersen, chair of TEP and President and CEO of LACI. “The $150 billion proposal can clean our air, unleash our nation’s diverse startup entrepreneurs, put over 2 million Americans to work in high-quality jobs, and help the U.S. lead the world in clean energy and mobility manufacturing.”

LACI convenes TEP, which is an unprecedented regional collaboration to accelerate transportation electrification and zero emissions goods movement when the world arrives in Southern California for the 2028 Olympic and Paralympic Games (see TEP Roadmap 2.0).

Read the full national coalition letter to Congressional leaders and the job creation estimates on Medium.

LACI is creating an inclusive green economy by: unlocking innovation through working with startups to accelerate the commercialization of clean technologies, transforming markets through partnerships with policymakers, innovators and market leaders in transportation, energy and sustainable cities; and enhancing communities through workforce development, pilots and other programs. Founded as an economic development initiative by the City of Los Angeles and its Department of Water & Power (LADWP), LACI is recognized as one of the most innovative business incubators in the world by UBI. Learn more at laci.org

The Transportation Electrification Partnership (the Partnership) is an unprecedented multi-year partnership among local, regional, and state stakeholders to accelerate transportation electrification and zero emissions goods movement in the Greater Los Angeles region (LA) in advance of the 2028 Olympic and Paralympic Games.