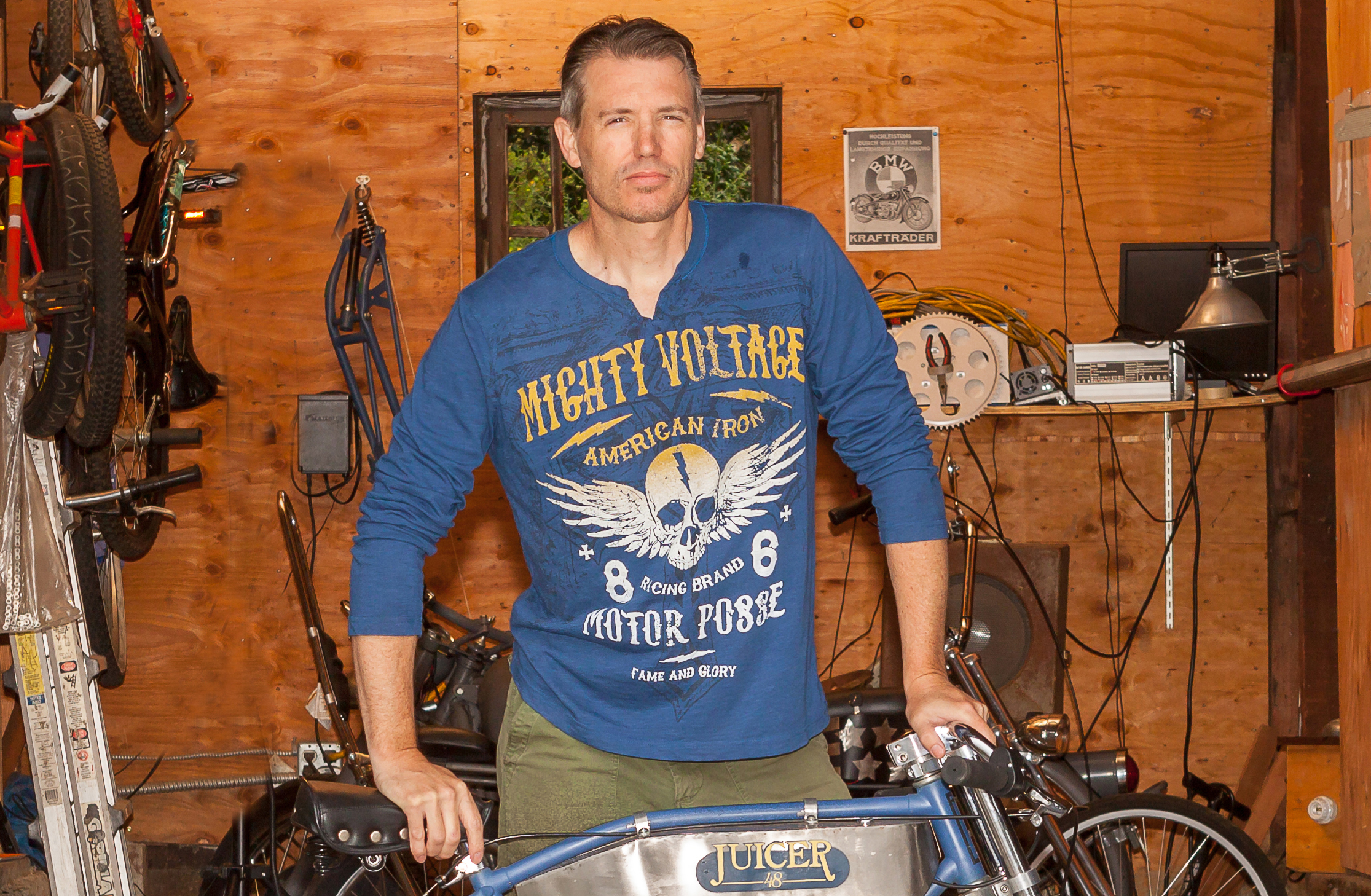 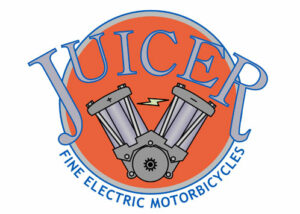 In the search for authenticity in today’s consumer culture, words like “artisanal”, “one-of-a-kind”, and “custom” get thrown around rather casually, in a longing for a time when mass production and homogeny didn’t define American transportation options.

In a remote garage workshop in the hills of Echo Park overlooking Los Angeles, Dave Twomey combines cultural and artistic inspiration from Southern California’s past with the electric vehicle industry and green movement that are shaping the region’s future to create Juicer Electric Motorbicycles. Hand-built by Dave himself, each bike is a product that combines components of lifestyle, culture, and art in ways that set it far apart from other e-bikes on the market.

Originally from Oakland, California, Dave moved south as a young man to study design at UCLA. Having a deep appreciation for SoCal-born art, Dave cites Robert Williams, George Barris, Big Daddy Roth and Von Dutch as some of his influences. LA being the home of lowbrow art, kustom kulture, and hot-rod culture, these were the forces that shaped the inspiration for what would eventually become Juicer. Looking closer, it’s clear how Juicer pays homage to these artists and movements. “Kids back in the ‘50s would buy the cheapest cars around, leftovers from the ‘20s and ‘30s, and turn them into hot rods, making them special and personal. That’s been going on ever since – Long Beach, East LA, San Diego, and now Hollywood all have this strong car culture. Crazy, imaginative machines come out of Southern California, and I think it’s only appropriate that Juicer be thrown into the mix”. Accordingly, Dave runs Juicer as a custom shop and builds each bike to the buyer’s specifications. For people who share Dave’s love for working with their hands, he builds the Juicer anticipating the prospect of customers “tricking out” the bike with simple hand tools themselves – encouraging a 21st century incarnation of hot rod culture by way of an electric vehicle.

In addition to the cultural influences of Southern California, the Juicer was also inspired by the first motorcycles of the early 20th century. Specifically, Dave references loop frame bikes of the board track era in the 1910s. He points out that for the first time since that day and age, the components of an electric bike are equivalent in power and weight as they were in traditional motorcycles 100 years ago. To him, it’s natural for the Juicer to resemble bikes of that era. While most electric motor vehicles hide their components behind plastic fairings, Dave makes it a point to be honest with the materials, showing them for what they are and arranging them in a visually harmonious way. “Part of the appeal and sexiness of a cruiser bike is that you can see the motor, see the belts and chain spinning, and so far that’s been an unfulfilled niche in two wheeled electric vehicles”. Where motors served as the central focal point of early motorcycles, Juicer applies the principle of form following function to Juicer’s electric battery pack. 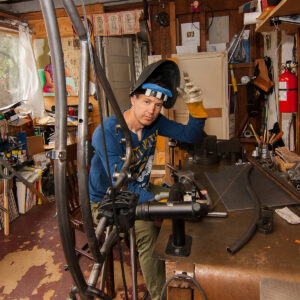 The craftsmanship, design, and philosophy behind the Juicer certainly differentiate it from other e-bikes out there. While most of these products are aimed at avid cyclists, Dave’s work aims to appeal to motorheads. “I see the electric bike not as a bicycle-plus, but as its own type of vehicle, one that’s underexplored. Rather than looking for customers who want to pedal around or want a longer range, I’m looking for people who want to ride”. This includes young people in the beach communities who can commute in comfort, ease, and style, and older customers who are moving off their motorcycles but don’t want to totally give up the cruising lifestyle.

Through targeting the latter, Dave feels he can make a larger impact as a green company by widening the net of potential EV customers. Instead of competing with other e-bike companies for the same group of clean-minded consumers, Juicer is a product that “reaches across the aisle”, bringing some of the worst eco-offenders into the clean energy fold, without having to compromise a powerful machine and some of the physical and aesthetic characteristics they’re accustomed to.

Dave is an artist whose work juxtaposes the past with the future, while filling an underrepresented niche in the electric vehicle market. His long-term goal is for Juicer to survive as an idea, and he is looking for partners in the industry to further evolve this new way of thinking about electric cruisers.

“When the EV museum is 50 years old, what will be in the collection of today’s era? I don’t think it’s going to be the plastic scooters or bikes that have disposable battery packs. I’m trying to make something that is repairable, customizable, and serviced by the end user. This seems like an old fashioned idea today, where we throw away our devices as soon as they stop working or the next new thing comes out.”

To that end, Juicer combines a classic aesthetic in form and craftsmanship with modern technology to create something truly authentic, bringing the vitality of Southern California’s cultural and artistic past into the 21st century.

For now, Dave’s days are spent building in his garage, doing what he loves, building on a little-known idea that has the potential to make a big impact – environmentally, culturally, and artistically.